Advanced App is HERE! 🔥
with a special treat thrown in!
🔙 Back to blog
Marta Serrano

App creators need to test their ideas and launch their products as soon as possible. Tech moves fast. Users change. We’ve created a free ebook where you’ll learn how to use Design Sprint & Bravo Studio to reduce risk and find the product-market fit for your app.
Design 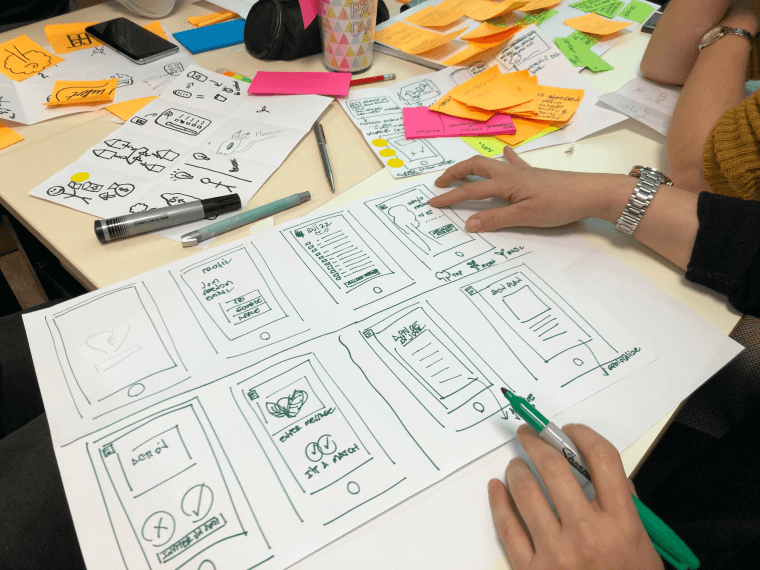 Startups, investors, companies, entrepreneurs and creators in general waste a lot of time and money on ideas that haven’t even been tested by a single user. There are hundreds of thousands of apps in every store that have a really low download count. Behind each of those apps you’ll find teams, agencies, studios, developers, designers, communicators, CEOs, COOs, CTOs and more. The solution? Validating your ideas before going all-in..

Why should you consider doing a Design Sprint?

You might already have noticed that the world is changing a bit too fast. Taking this into account, you probably realize that it’s impossible to predict what will happen with the industry, with our users or with the market and, consequently, we cannot know for sure what will work and what will not in a couple of months.

App creators need to be flexible and fast enough to design and develop apps quickly, react and adapt to unexpected changes and, most importantly, iterate on their ideas. App building cannot take 3, 6 or 12 months. Plus, ideas need to be tested!

Design Sprint is a methodology that’s based on the fundamentals of Design Thinking and focuses on the user, reducing the waste produced during the design cycle and improving UX through multiple iterations without losing time while producing documentation. This does not mean not working on research but optimizing it. There are 3 key phases: build, measure, learn.

Design Sprint assumes that the first release of a product will always be incorrect and will need an iteration. This is the reason why it is considered more important to launch a prototype developed using minimum resources and start collecting feedback from real users as soon as possible than spending months designing and developing a “perfect” product based on a hunch. The outcome will probably be outdated at the time it’s released.

What’s the Design Sprint all about?

Basically, a Design Sprint  helps you build prototypes from a transversal perspective, taking into account, at the same time, the emotional, usable, trustworthy and functional traits.

The Design Sprint incorporates a technique to ensure that, although it seems contradictory, the brainstorming of a multidisciplinary team is structured, follows a timetable and is not carried out during infinite meetings where the one who shouts louder or has a more clear idea is right. The Design Sprint decentralizes discussions and gives the decision maker the power to choose, after hearing different perspectives, which path to take.

Companies like Slack, Google, Uber and Twitter have been using Design Sprint for a while now. You can find here and here some case studies.

The key is to stick to a timetable, follow a series of steps and get a prototype that’s been tested by 5 users by the end of the week.

I want to learn how to Sprint!