Advanced App is HERE! 🔥
with a special treat thrown in!
🔙 Back to blog
Pedro Codina

#MadeWithBravo: How a no-code menopause app prototype got a new startup into the biggest startup campus

Michelle Caira is a non-tech Scottish founder who lives in France. She has been working for a while in an app for new mums called Fit Mama. This year she created a no-code prototype for her new startup: The Menopause App. She presented it at Station F in France and got into a Femtech program. The next challenge? Building a no-code MVP.🔥
#madewithbravo 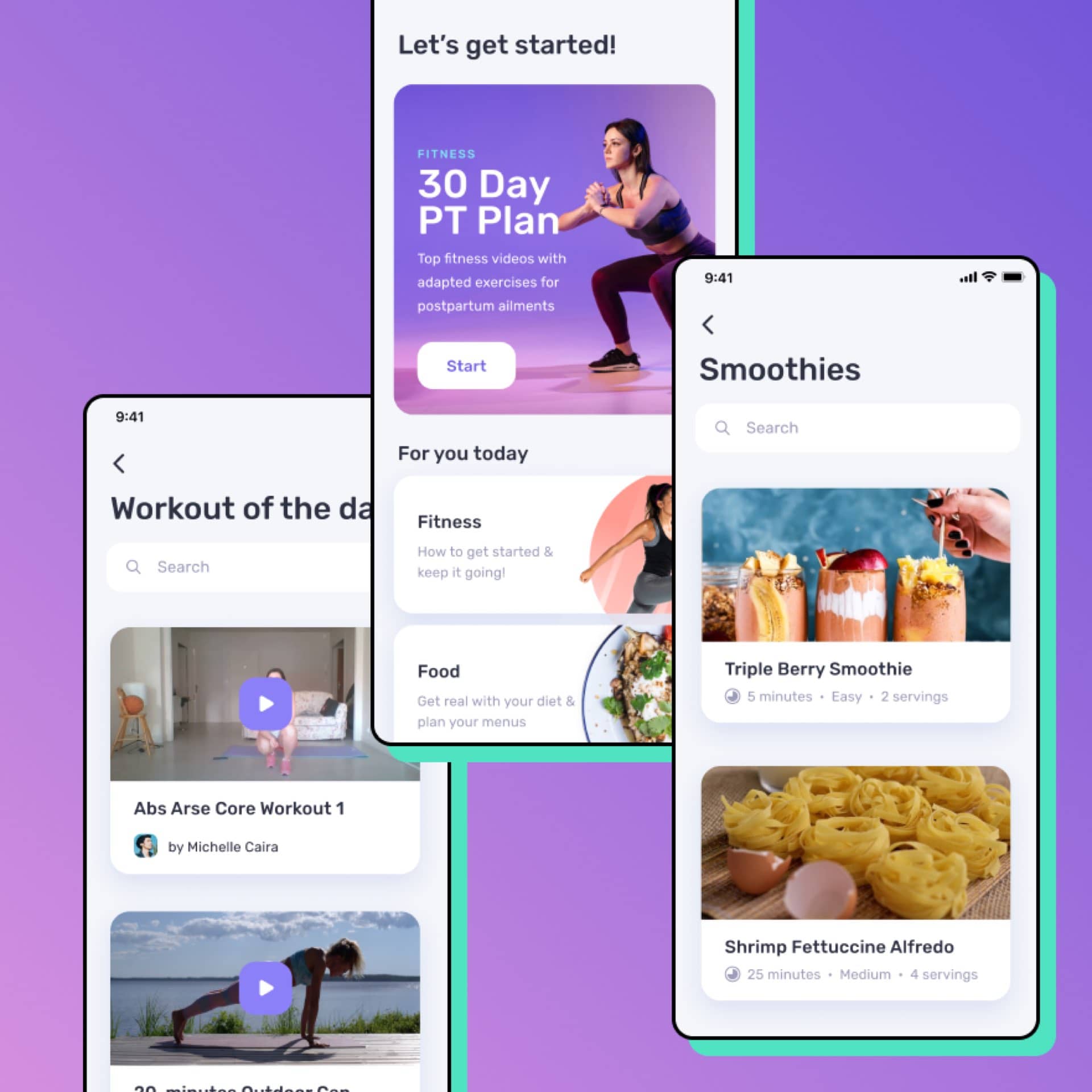 First, could you introduce yourself and your projects?

So, my name is Michelle Caira, I am Scottish and live in France. I am the founder of two startups. They are both in the same industry: fitness, health, and wellness. One is for new mums called Fit Mama and one is for people going through menopause called The Menopause App. My introduction to Bravo and also to The Menopause App came via Fit Mama. So I took Fit Mama as a business and as a start-up through the application process of two different accelerators in the USA.  We didn’t succeed and one of the pieces of feedback was “why don't you look at the menopause industry? Because it's really big.”

And I decided to look at how people were building startups on Twitter. Everyone seemed to build in public, and they seemed to build really fast with no code, ship the product, and then fix the product if broken. And that was a completely different way to what I had done with Fit Mama because with Fit Mama, I'm a non-tech founder, there were no no-code apps or stacks prior to when I first started.

So for me, I looked and thought, I have no emotional connection with The Menopause App at this stage. It's an idea, I just want to see if it’s going to work. So I want to do this as quickly as possible. I don't want to waste my time.

How did you decide to go with a no-code stack to build your app?

I put out a tweet that just simply said “Are we still using Figma plus Bravo Studio plus Airtable as a no-code stack?” I just wanted to understand if that was a good stack to use.

And I got the reply back from Bravo Studio that said “This is great, what are you building?”. And so they slid into my DMs and we started to communicate and I said: I want to build this prototype. I don't want to waste any time on it because actually, in my mind, what I'm trying to do is to prove that the Menopause App is not as big as Fit Mama.

And you know, with the next investor for Fit Mama, I can say “Yeah, I checked out the menopause idea and it wasn’t so great”. And so I said, “I just want something really basic and I've already got a UI/UX Figma kit. I want to take five or six different slides from there and put all that together with the data on the table. That's all they want to do. I just want a prototype.”

So the Bravo team said they could help me with that and they could take me as far as possible with the prototype.

What was your goal with the prototype?

The goal was simply to take it to potential investors or accelerator programs and to see how far we could get and if we got far great, I would build the business behind the prototype, which is the complete opposite of what I did with Fit Mama. With Fit Mama I had researched it and worked with clients for seven or eight years before going to build the app. So I approached both companies completely differently. And it's really fun to see which one is going faster.

So the prototype was built really quickly on Bravo, and that was basically the start of the journey.

When did you decide to go from personal trainer to app creator?

Well, for me, I'm actually a pen and paper person. I was born in a generation that is between the millennials and Gen X. So we are this generation of five or six years. It's a special period of time where we were analog growing up, and we only got introduced to email as we went into University. And so that has kind of followed through.

So creating an app for people who are going through menopause doesn't necessarily need to be the most advanced app ever in the world, because you've got to ask the question: Do they have all of the correct wearables to talk to that app? Are they used to downloading so many apps as younger generations? Most of them are pen and paper people just like me! So maybe such an advanced app isn’t required at this stage and maybe it’s something we should build in two or three years’ time for the millennial people coming into pre-menopause stages.

To build an app for menopause was kind of a no-brainer because what is out there in the market at the moment are simply websites. So for me, all I could see was websites giving information. There is an app that records your symptoms every day but where’s the output? What are you doing with all that input? The app is built so that you can press print and take the paper to your doctor.

And what’s the main difference between those apps and The Menopause App?

What I want to build is something that gives solutions. I found a report from Women in Sport UK that basically correlated the age group of 41 to 60-year-old women and how they reduced their workout, their fitness, their involvement in sport.  And looking at that, I was then able to say, okay, here's the gap in the market. The gap is that women are dropping out of physical exercise and activity. This is where we should go. So this is the solution.

The idea of The Menopause App is to take all of the symptoms that you're inputting into our app and then through AI push out the workout each user should do on that particular day based on what they’ve told us or the food and nutrition they should intake or the mental wellness plan we recommend. It’s 100% personalized, highly gamified, and community-driven. We need women to get into fitness without this being a burden or something that frustrates them. It’s a long process. You won’t “get fit” in just a couple of days. It takes 3 months to actually notice the results. So the app must be really welcoming and not become another stressful aspect in their lives they are going to delete.

What are your plans to launch The Menopause App?

At first, I’ll use the prototype purely as an image and as something that I can show on my phone in a video to describe what the product will do and pitch to investors. I don't want to bootstrap a second startup. It's painful and I just don't want to do it.

In September I got an email from Station F, a startup campus in Paris, telling me they’d like me to apply to the first cohort of a Femtech program with The Menopause App. I needed to create a business plan and a pitch deck and find two co-founders to help me move faster. So I did. It was absolutely wild.

Now we are planning to build an MVP with the no-code stack we used to create the prototype. We are in Station F for the next 6 months and besides the MVP we will be building the whole company towards a demo day that will be at the end of the program.

Do you think each of your audiences (new mums vs menopause) impacts the rhythm at which you can build your startups?

Yes. I think it's because the new mum or postpartum demographic has been around for centuries. And so there doesn't seem to be such a rush to do anything there. There are competitors, of course, but I can take my time.

Menopause has been around for the same for absolutely generations and centuries. But there seems to be a rush with that right now. Who is the first product to market? Who is getting there first? Because we are now going through an era where menopause is talked about. I didn’t want to waste time thinking about what to build first. I wanted to go straight to the prototype.

It was completely the opposite. I needed to get there first. And what's the quickest way? No-code.

Why did you choose to focus on the wellness and health industry?

I have been interested in female health, wellness, sport, and exercise all of my life. Towards my late teens, I became very interested in the menstrual cycle. In the UK, when you reached a certain age, you were immediately put on the contraceptive pill. That seems to be it. And then once you're there, you're in relationships or you're not, but you're always on the pill. And I decided I didn't really want to do that. So when I was 20, I came off the pill, I went to this local book store and I came across this book called Taking Charge of Your Fertility. I read that book from cover to cover, I was blown away by how little I knew about my biological system and what happens in the menstrual cycle.

I was extremely excited because I was able to now take control and it was for fertility awareness so that you can either fall pregnant or avoid pregnancy. I found that book absolutely fascinating. There's a chapter on menopause, but the whole book for me was just life-changing entirely. I'm 42 now, so we're talking about 20 years ago.

In terms of women and their menstrual cycles and tracking how those cycles may affect your mood, your motivation, your energy, your sleep, your relationships, they will literally impact everything. So I was really interested in that aspect of it. I always have been.

When did you start working with women?

I worked in corporate banking for a while and then began working as a personal trainer with women and especially new mums. The whole pregnancy is really a two-year process. You have the preconception, the full pregnancy, and then the postpartum stage. So you're working really closely with these clients and you're helping them in every aspect of their fitness, their physical fitness, their health and nutrition, and also their mental wellness, especially mums, who are returning to the workplace and they are literally saying “I don't know how I'm going to do this”.

And then when you take further along the female journey and she gets to the stage of menopause, then many are asking themselves “What if I had exercised and worked on my fitness when I was in my 30s”. And there’s no data about that. I believe that if you make fitness and health part of your daily life in your 30s, going into menopause can be a much easier process.

There's not enough medical research out there, but certainly, we know that fitness, health, and wellness can't go wrong. It's worth starting.